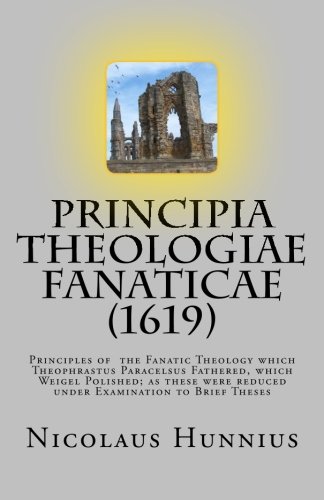 Nicolaus Hunnius (1585–1643) was one of the most significant theologians of the Age of Lutheran Orthodoxy. Hunnius was a professor of theology and philosophy at the University of Wittenberg by the age of 24. He eventually became the superintendent (bishop) of Lübeck, where he led the clergy in an effort to defend and restore the Church in that city. Hunnius was the author of numerous theological works, including the Diaskepsis Theologica (1626). His Principia Theologiae Fanaticae was a careful analysis of the theological principles of those whom he deemed ‘fanatics’—the followers of Paracelsus, Valentin Weigel, and the adherents of the Rosicrucian movement. Indeed, Hunnius’ Principia is one of the first contemporary responses to the Fama Fraternitas of the Rosicrucians, and it places the occult movement within the context of a more widespread interest of Hermeticism, Cabalistic studies, and occultism which had developed during the early years of the Italian Renaissance. Hunnius challenged the theological presuppositions of the “fanatics” and upheld the authority of Holy Scripture and the office of the holy ministry.