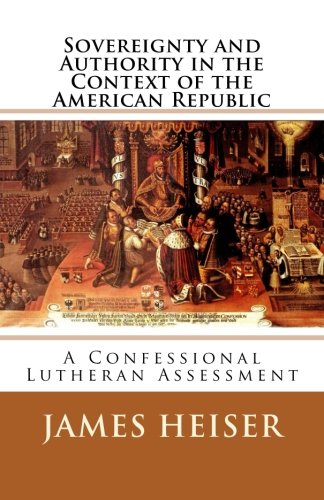 Discussions concerning the Church-State relationship have gone on since the days of the Roman Empire. However, the Modern Age—beginning with the Renaissance and Reformation—has been marked by significant changes in the understanding of the entire discussion. Martin Luther’s theological assessment of the conflict between Emperor Charles V of the Holy Roman Empire and the Lutheran cities and states which made up the Schmalkaldic League was of profound significance in the context of the Reformation Era. Halle Pietists would later submit to the Prussian Absolutism of Frederick Wilhelm I (1688–1740) in an effort to destroy the authority of the Lutheran Church. The legacy of Pietism was a misinterpretation of biblical Lutheran theology which presents the Church as wholly submissive to the State. In this monograph, Bishop James Heiser of the Evangelical Lutheran Diocese of North America (ELDoNA) offers a succinct assessment of the theological position which was upheld by Luther and other theologians of the Lutheran Reformation, and reflects on the early American understanding of the relationship between Sovereignty and Authority promulgated by several of the founding fathers of the American Republic. “A profoundly interesting and important contribution to what can be a difficult subject. James Heiser has made it accessible and engaging. Bravo!” —Peter Schweizer, President, Government Accountability Institute, author, Clinton Cash, Extortion, and Reagan’s War.