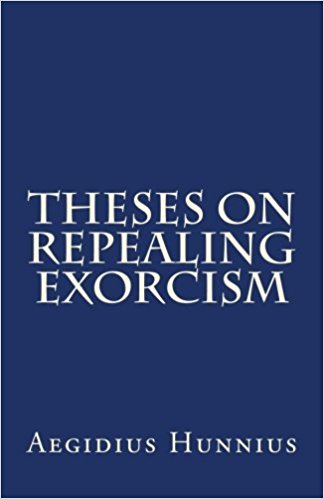 Aegidius Hunnius (1550–1603) has been described as one of the greatest exegetes of the later years of the Lutheran Reformation. He served on the theological faculties of the University of Marburg (1576–1592) and the University of Wittenberg (1592-1603). An articulate defender of the Evangelical Lutheran faith, Hunnius was instrumental in removing the influence of crypto-Calvinism from Saxony, and was the primary author of the Saxon Visitation Articles (1592). He was the author of numerous books and pamphlets, several of which have now been translated into English by Rev. Paul Rydecki and published by Repristination Press. In this book, Hunnius details, through a series of 128 theses, why the Wittenburg faculty supports the removal of exorcism from the baptismal liturgy. While Luther had originally reduced the multiple exorcisms found in the rite inherited from Rome down to just one, by the 1590s the practice still was clearly not being correctly understood, causing not a few people to look to the exorcism rather than to Baptism itself for comfort. Since there is no command to exorcise in Jesus’ command to baptize, the Church would be free to disinclude it; here he examines whether inclusion or exclusion would best serve the Gospel.