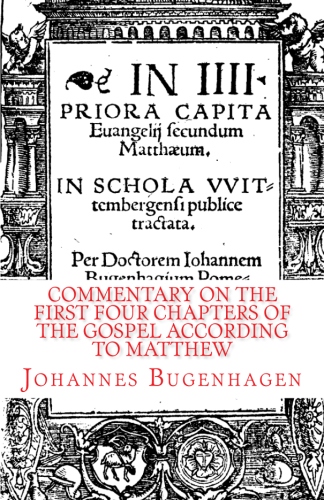 Johannes Bugenhagen (1485–1558) was one of the most important theologians of the Lutheran Reformation. In addition to serving with as pastor of St. Mary’s Church in Wittenberg, Bugenhagen served on the theological faculty of the University of Wittenberg and was heavily involved in the reform of several of the territorial churches which were affiliated with the Reformation. Bugenhagen’s Commentary on the First Four Chapters of the Gospel according to Matthew is an exegetical treasure. In this volume, Bugenhagen undertakes a thorough explanation of various issues, including to the genealogy of Jesus, the prophetic promises concerning the Virgin Birth, the implications of the flight of the Holy Family into Egypt for Christians suffering persecution, the salvific character of John’s Baptism, and the application temptations which Christ suffered in the wilderness to the temptations which have confronted the Church throughout the ages. First published in Latin in 1543, this is the first English edition to be published. It is the second volume in a series of works by Johannes Bugenhagen to be published by Repristination Press.