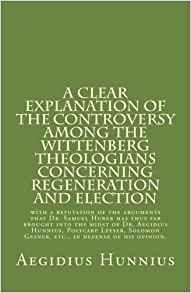 “The matter under controversy is whether, just as that will of God, the satisfaction of the Son and the promises of the Gospel are universal, so also election is to be called universal, such as when it is stated that God elected all men equally to eternal life. Huber affirms this; the rest of us, his colleagues, deny it. We will disprove the reasons that he sets forth for his position briefly and in an orderly manner. “Meanwhile, this must be dealt with first: Since both sides agree about the universal will of God for the salvation of men and about that general love of God which Christ mentions in John 3, can this general love and beneficent will of God be called ‘election,’ and thus, can it be asserted that God elected the whole world to eternal life? “Response: For our part, we have no desire to quarrel with anyone over words or phrases (as long as the matter itself remains secure and there is no danger near at hand). And for that reason, we do not bring up on charges those who improperly and mistakenly call that ‘election’ which we have called ‘the merciful will of God.’ But since Dr. Huber has concluded that the Scripture everywhere teaches a universal election, properly speaking—so much so that he writes that all men, truly, properly and unmistakably have been predestined and elected to salvation; and since he does not wish to acknowledge in any way that he has improperly said that unbelievers, too (Turks, etc.), are elect; and since he most absurdly interprets those very passages that deal expressly with predestination, such as John 7, Romans 8, Ephesians 1, and, similarly, 2 The. 2, 1 Pet. 1 and 2, to be concerning the election of the whole world to eternal life; since he has not blushed publicly to accuse his dissenters, and especially us, his colleagues, of Calvinism, in spite of all our merit; we could not fail to perform this cleansing in the Church of God, and at the same time come to the aid of the truth in distress and warn about the danger that exists in this new manner of speaking in which he not only states that the whole world was elected to eternal life, but also imagines a general justification in which the whole world has been justified before God, with sin having been remitted and equally forgiven to all men. In fact, he also imagines a general adoption, and also a general sanctification of all men, a regeneration of hypocrites through a Baptism undergone with wicked intent, and other similar things that we will examine in an orderly fashion.”